Integrity, experience, commitment... is what Cormac is all about. 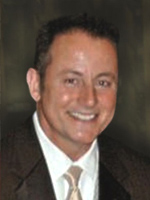 Chuck retired as a Lieutenant from the Myrtle Beach Police Department after 27 years in law enforcement. Chuck started out as a foot patrol officer and worked his way up the ranks and became the commander of Uniform Patrol, Traffic, and the Beach Patrol Divisions. He has extensive knowledge and training in the use of firearms and firearms safety. Having spent his career in uniform, Chuck understands the needs in law enforcement and what equipment officers need to perform their duties effectively and efficiently. Cormac is proud to have Chuck as the retail store manager in Myrtle Beach and a leader and a role model for our employees. James Eagleson - International Sales Representative
James Eagleson is Chief Operations Officer and founder of The 4:20 Group, LLC, a law enforcement training company. James travels worldwide providing training to foreign governments in interdiction and border security training. James is an accomplished author and has written three books dedicated to training law enforcement. James spent 14 years as a law enforcement officer with the South Carolina Department of Public Safety and retired in 2007. During his law enforcement career, James mainly worked interdiction on the I-95 corridor in South Carolina. James received numerous awards to include the Robbie Bishop Award from the National Criminal Enforcement Association and he was named Officer of the Year by four different departments in South Carolina. Prior to being in law enforcement, James served his country and was enlisted in the Navy. 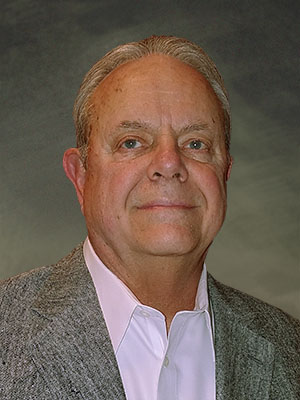 Nelson "Ed" Elder - Idaho Sales Representative
Area of Responsibility (Counties):  Ada, Kootenai, Canyon, and Blaine
Ed Elder began his public service in 1968 while serving in the United States Army and fought in Vietnam. Upon returning from Vietnam, Ed began his law enforcement carrier with the Federal Bureau of Investigation in 1970 where he had a Top Secret Clearance. In 1975, Ed took a position with the Los Angeles County Sheriff’s Department where he worked for about 30 years. While with the Sheriff’s Department, Ed did a variety of jobs to include patrol, narcotics, organized crime investigations, court services, executive planning council, and training. Ed received numerous commendations and awards to include Meritorious Service Award, Distinguished Service Award, and a Commendation from the Los Angeles County Board of Supervisors for services to the community and citizens of Los Angeles County. Ed retired as a Sergeant with the Sheriff’s Department.

Jackie is a valuable member of the Cormac team. Jackie supervises and manages Cormac's in-house embroidery, alterations and uniform patch applications. Jackie specializes in custom embroidering, monogramming gifts and clothing and  custom screen printing. Jackie also provides custom alteration and adjustments for clothing and uniforms sold at Cormac. Jackie is also a mentor and role model for the employees at Cormac and she is a pleasure to work with. Cormac is very honored to have Jackie as a member of Team Cormac. 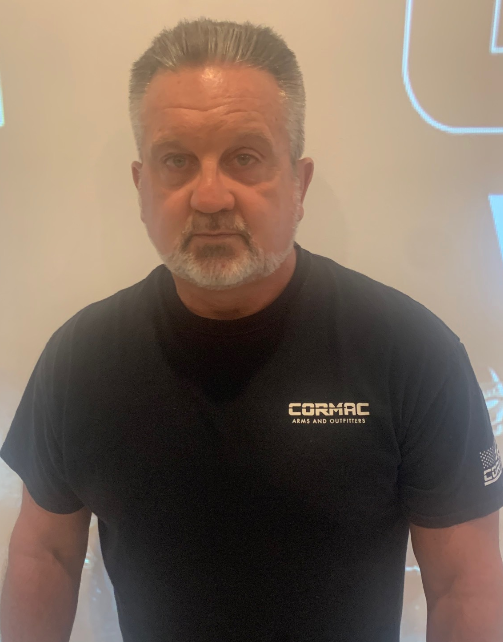 Doug grew up in Ohio and moved to Myrtle Beach in the early 1980’s. In 1986, Doug began his employment with the Myrtle Beach Police Department. While as a police officer, Doug was assigned to the Patrol Division, Beach Patrol, and Narcotics Enforcement. Doug was promoted to Sergeant and then Lieutenant where he supervised the Special Operations Unit, Waterfront, Patrol, Training, Traffic, Investigations, Federal Task Forces, SWAT, Civil Emergency Response Team and the Administrative Division. In addition, while employed with the police department, Doug also handled several collateral duties to include vehicle purchasing, budgeting, and building projects. A a police officer, Doug received several awards and recognitions to include Police Officer of the Year and Outstanding Employee of the Year. Doug has numerous certifications to include being a firearms instructor, Active Shooter Response, and Simulator Instructor.    Cormac is very proud of Doug’s accomplishments and we are privileged to have Doug on our staff. 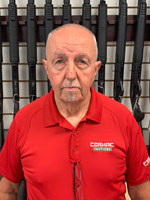 Al has over 35 years of service in law enforcement and as a First Responder. Al retired as a Detective with the Camden City Police Department in New Jersey where he also worked as a Firefighter. During Al's time as a Firefighter he spent 8 years as a Chief and Al is a Certified Instructor where he provided training at the Camden County Police Academy, Camden County Fire Academy and Gloucester County Fire Academy. Al also served as the Emergency Management Coordinator in the Township of Greenwich, New Jersey and Al  was a Deputy Fire Coordinator and a member of the Incident Management Team in Gloucester County, New Jersey. Al is currently the Assistant State Coordinator for the Warriors Watch Riders of South Carolina, who assists veterans in our community. Al is also a member of the Horry County Firefighter Relief Association.  sales team. 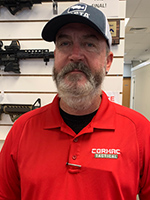 Phil has worked for the Myrtle Beach Police for about 15 years in Support Services, as a Jail and Transport Officer and a Volunteer Police Officer. Phil also worked in the retail business over the years and has managed several retail stores. Phil retired from the police department in 2015 and is now a valued member of the Cormac Team. Robert is our primary Instructor at Cormac and he is a certified instructor through the NRA and teaches our Concealed Weapons Class, Basic and Advanced Shooters Class and the Refuse to be a Victim Class. Robert is a retired police officer who worked for the Conway Police Department and the Coastal Carolina Department of Public Safety. Robert is also the Director of Security at Broadway at the Beach and Bearfoot Landings Complex. Cormac is very proud to have Robert on our staff. 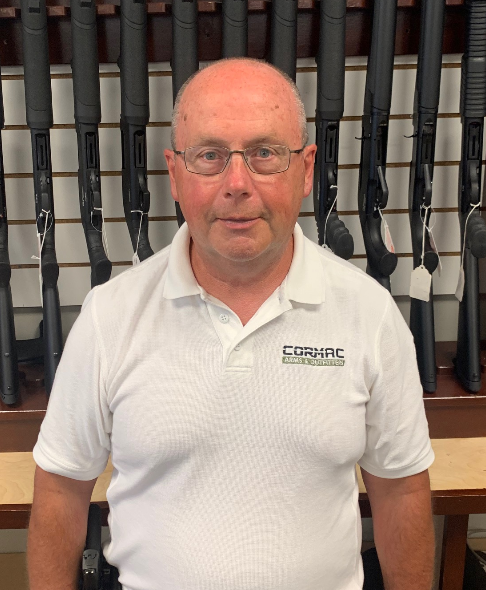 Dave Rowland grew up in Eastern New York and Southern Vermont. Dave went to college at Hudson Valley Community College and SUNY Albany where he received a degree in Criminal Justice and Political Science. Dave began his law enforcement career in 1988 with the Bennington County Sheriff’s Department. Dave worked as a Corporal, Detective and Sergeant and he supervised the Bureau of Criminal investigation. Dave was also a Firearms Instructor and he received certifications from the FBI as a handgun and shotgun instructor. Dave also received formal training at the SIG Academy and Blackwater and he is also a Patrol Rifle Instructor. Dave is also a Use of Force Instructor, Baton Instructor, OC Instructor, Crime Prevention Analyst, and a Field Training Officer. Dave was also a member of the Northeast Meth Lab team and Bennington’s Special Response Team. Dave retired in 2015 and he and his wife, Kelly, relocated to Myrtle Beach. Dave has two sons who live in Vermont. Cormac is very proud to have Dave on our team and we look forward to having him as one of our firearms instructors. 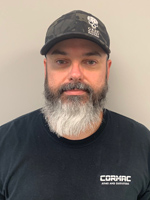 Daniel joined the U.S. Army in 1990. While in the military, Daniel was a Infantryman, Cavalry Scout and he worked as a Military Occupational Specialty Instructor. Daniel retired from the military in 2009 and began his career as a Federal Police Officer with the Department of Defence. During his time as a police officer, Daniel worked as a collision investigator. In 2003, while Daniel was deployed in Iraq, he began working as a gunsmith specializing in the mechanics of the M-16 and M-4 rifles. During the past decade, Daniel has custom built AR-15's and has mastered designing and cerakoting rifles. In 2012, Daniel retired as a police officer and he continued his work as a gunsmith and is now recognized as one of the premier gunsmiths in South Carolina. Cormac is very proud to have Daniel as our Director of Manufacturing and to have Daniel on our staff. Alanea is a native of Utah and has been a gun enthusiast since she was a small girl. Over the years, Alanea used her creative skills in custom cerakoting firearms and building M-4 and M-16 style rifles. Not only is Alanea an accomplished gunsmith, she also has over 15 years of retail and customer service experience and she was a top producer in real estate sales. Since 2016, Alanea has volunteered with the Civil Air Patrol where she served as a Squadron Commander. Cormac is very proud to have Alanea on our sales team working to provide great customer service and helping you to build and customize your firearm. 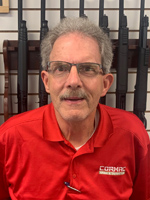 Robert “Bob” Orlowski, grew up in Linden, New Jersey and in 1974 he received an Associates Degree in Electronics Technology from Union County Technical Institute.   As a young man, Bob was involved with the Boys Scouts of America and he volunteered as a Scout Leader. Bob was also an Emergency Medical Technician and a member of the Ambulance Corps  and the Budd Lake First Aid Squad. Around 1990, Bob moved to Myrtle Beach and he began working as a Detention Officer at J. Reuben Long Detention Center. Bob started as a Juvenile Detention Specialist and he was subsequently promoted to Training Sergeant. Bob was then promoted to Detention Lieutenant where he supervised the Internal Affairs and Professional Standards Unit and he was Detention Safety Coordinator. Bob also received training in Basic Instructor Development, Basic Law Enforcement, Jail Management, Mid-Level Management Leadership and Master Instructor Program for the South Carolina Criminal Justice Academy. Bob is also certified as a Taser Instructor, Pepper Ball Instructor, Glock Armorer, Smith and Wesson Armor for hand guns and Remington Shotguns. Bob retired after 31 years of service and Cormac is proud to have Bob on our team. Tom is a native of Northern Virginia and grew up in Fairfax. Tom Joined the Fairfax Police Department in 1987. Tom had a variety of assignments to include being an instructor at the Northern Virginia Criminal Justice Training Academy where he was an instructor for Field Training, Motorcycle Skills, Speed Measurement, and Emergency Vehicle Operations.  Tom also received specialized training for Dignitary Protection and Escort, Surveillance and Counter Surveillance, and Active Shooter Response.  In 2014, Tom retired from law enforcement and became a full time instructor at the Northern Virginia Criminal Justice Training Academy.  In 2018, Tom moved to North Myrtle Beach and he joined the Cormac Team.  Cormac is very proud to have Tom as a member of our staff. 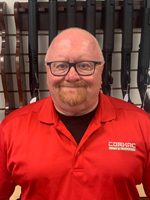 Dwight grew up in Virginia and lived overseas for a period of time before his family settled in Fredericksburg, Virginia. Dwight spent 16 years doing graphic design work and in 1996 he began his law enforcement career with the Fairfax County Sheriff’s Office.  Dwight attended and graduated from the Fairfax County Criminal Justice Academy. During Dwight’s 24 years of service with the Sheriff Office, he worked in the Detention Center and Court Security. Dwight was also assigned to the Transportation Unit, the Fairfax County Gang Unit, Sheriff’s Office Intelligence Unit and Bike Patrol. Dwight was certified as a General Law Enforcement Instructor, Field Training Instructor, Bike Patrol Officer, and Bike Team Mechanic. During his time with the Sheriff’s Office, Dwight earned an Associate’s Degree in Criminal Justice Administration from Northern Virginia Community College. Dwight was also awarded a Meritorious Action Award and Lifesaving Award for his actions while in law enforcement. Dwight retired from law enforcement in 2020 and relocated to Myrtle Beach. Cormac is proud to have Dwight on our staff. 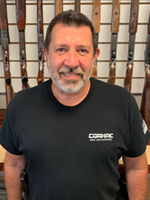 Tony is a native of Virginia and grew up in Falls Church, Virginia. He joined the Fairfax County Sheriff’s Office in 1988 and during his law enforcement career, working in the Adult Detention Center, Court Security Section, the Civil Enforcement Division and the Sheriff’s Intelligence unit. Tony also received extensive training to include Active Shooter Response, Domestic Violence Response, Physical Security and Executive Security. He also is recognized as an Expert Marksman and he received two County Outstanding Performance Awards and a Lifesaving Award. Tony retired as a Lieutenant from the Sheriff’s Office in 2016 and he worked as the Director of Security at Tysons Corner Center in Northern Virginia. In 2019, Tony moved to Murrells Inlet with his wife and joined the Cormac Family. Cormac is proud to have Tony on the Cormac Team.